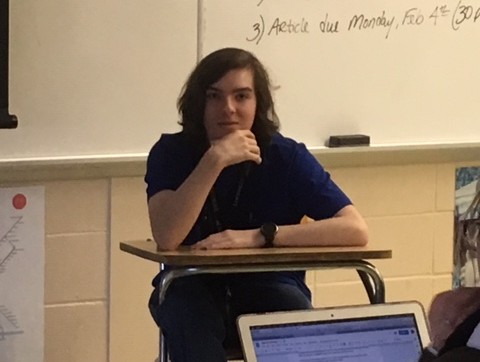 Submitted by Gabrielle Mackiewicz on 31 May 2019

Tucked into the end of the hallway in the first floor annex, the Nutley High School Robotics Team prepares their very own automated creations for competition. Programmers work to write code for the robot to give it directions, while builders create the structure. Senior Lisle Hill leads the group as captain, and has worked as a builder and driver, but stepped back this year to prepare underclassmen for future years.

Lisle started on the Robotics Team his freshman year, but his activity in the world of automation technology started much earlier. “I’ve been building robots since I was in grammar school, there was never really a beginning,” he says. “I’ve always kind of wanted to forge my own path and do my own thing.”

He used to make model rockets, build LEGO sets, and work with a lot of mechanics and gearing things. “It really helped spark my interest in the field,” he comments. Now he works on “all sorts of wooden creations” and model aviations. His latest project was a quadcopter, an aircraft with four propellers, which he built solely based off his knowledge and without instructions.

For Lisle, the Robotics Team is just a continuation of these projects. “It gives me something to do after school, and it helps keep my mind sharp,” he says. He has many friends that are on the team along with him, and has made many more through the program.

At home, his parents have supported these efforts, and may have even inspired them. Lisle’s father also used to make model planes when he was younger and worked as a plumber, while his mother grew up as a farmer and would often repair equipment. He gets this hands-on influence from both of his parents. “My family has supported me the entire way to make my crazy dreams become a reality,” he says in regards to building.

Each year, the Robotics Team attends competitions, where the robots are required to perform a series of tasks to complete a goal, which vary each year. The group meets after school in Mr. Vance Campbell’s room, who teaches Cisco and IT Essentials as well as coaches the team at NHS. They all work on building the robot for competition.

“Robotics requires a lot of creativity and thinking outside of the box,” Lisle says. “There are no wrong answers, you can do whatever you want.”

Competitions are pretty hectic for the team. In the days leading up, they spend a lot of time doing last minute changes and improvements. At the event, students are always on hand to fix the robot, because it seems to always inevitably break.

Despite their best efforts, the team did not do so well at their last tournament in Milburn this January, and came in last place. However, the odds were stacked against them before they even started. “We kind of looked around and saw that we were no match,” Lisle explains.

The NHS Robotics Team has significantly less funding compared to other schools nearby, which puts them at a severe disadvantage. Lisle says, “Compared to other schools, we are nowhere even close.” Though the group does get some money from outside organizations and has done fundraisings to help defer costs, they do not get much from the school, which hinders their potential. However, Lisle stays positive about their financial issues. “Little funding is just  another challenge you have to work for and find a solution to,” he says.

This attitude of working towards success has driven Lisle to achieve with his interests. “It’s always been a struggle, but I’m up for the challenge,” he explains. “That’s what I think drives creation - if there is ever a struggle, you need to work through it and eventually you’ll get it.”

While the Robotics Team seems outmatched now, that doesn’t mean they aren’t capable. Lisle’s favorite memory as a part of the group was from a few years ago, when they came in second place at a tournament. “It proved program was going in the right direction,” he says.

After high school, Lisle is set out to continue his interests in a career in aerospace engineering. He has been accepted into Embry-Riddle Aeronautical University in Daytona Beach, Florida, which focuses in this area. The school works with NASA and is close to the Kennedy Space Center, providing ample opportunities for hands-on experience.

The transition from high school to college doesn’t seem daunting to Lisle, as it does for many, and he thinks he will take the change with ease. “I don’t really have many feelings about graduating, I’m just moving on to another school that is a lot cooler than this school,” he says with a laugh.

Even after he leaves NHS, Lisle doesn’t plan on leaving the Robotics Team. During breaks he intends on coming back to help out, and will not be abandoning this interest. “I consider this more than a hobby,” Lisle says.