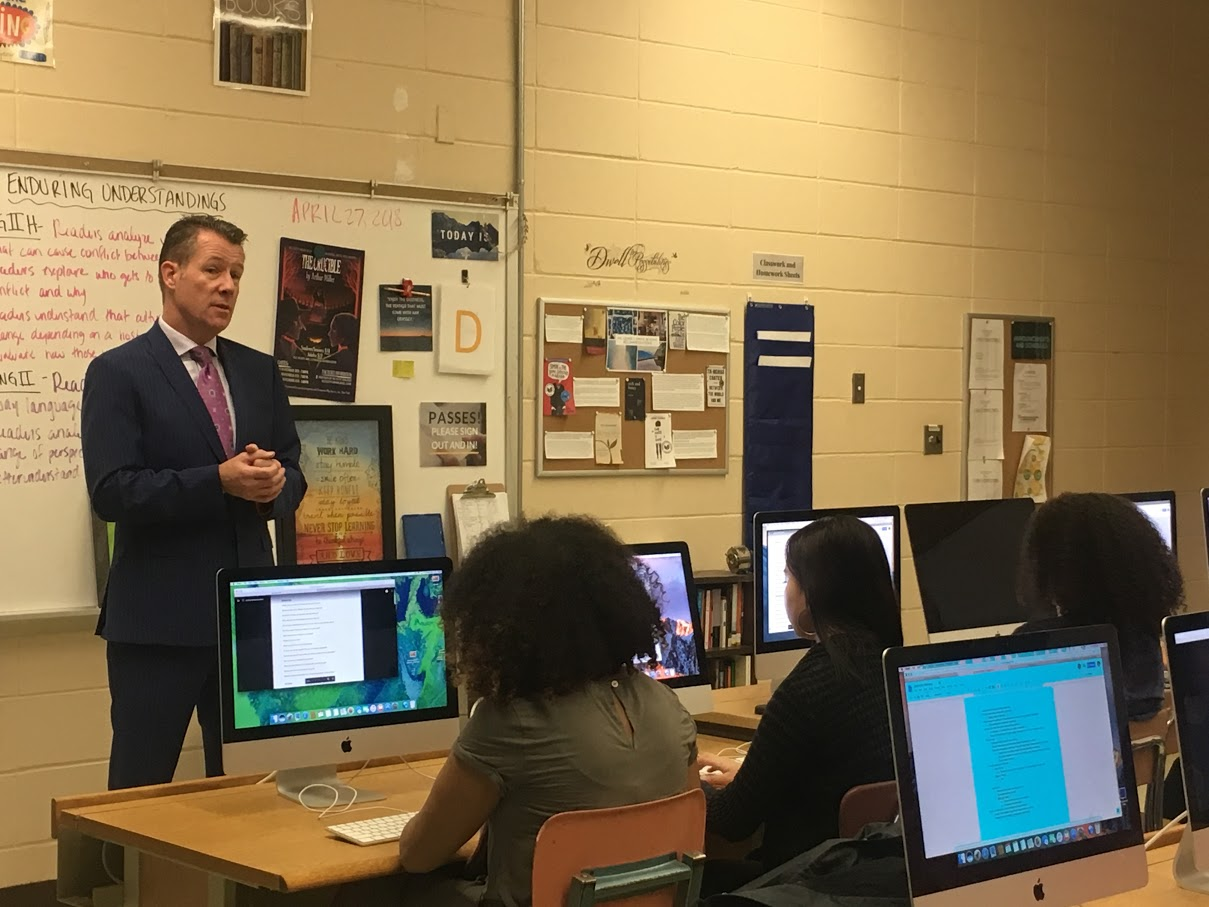 From Newspapers to Broadcaster: A Look at Jack Curry

Submitted by Gabrielle Mackiewicz on 19 June 2018

The world of journalism is a complicated business. Throw in the politics of sports and the difficulty of live television, and you will find yourself in the realm of Jack Curry. Curry is a reporter and analyst for the Yankees Entertainment and Sports Network, or YES Network. The 53-year-old covers all things New York Yankees, from player interviews to pre and post game analysis. On Friday, April 27th, Curry visited the Nutley High School journalism class. The tables turned as students were given the opportunity to interview him, asking questions about his work, passions, and upbringing.

Curry knew all his life that he wanted to be a sports journalist. Around age 12, his interest sparked, as he and a teacher started a newspaper at his school in Jersey City, where he grew up. This love continued through his college years at Fordham University, and he landed a job at the Star Ledger. He went on to the New York Times in 1987, and worked there for 22 years. At the NY Times, he started out covering the New Jersey Nets, but quickly moved on to writing about the Yankees, where he found his niche.

In 2010, Curry joined the YES Network as an experienced and established writer in baseball. His strong and confident personality made him a perfect fit for the job, allowing him to have positive relationships with players and grab the attention of fans. Curry has built trust with players, and which has led him to many fun and interesting interviews. One of his favorite interviews was with Mariano Rivera, a former pitcher for the Yankees, because of its easy flow. “It wasn’t an interview, it was a conversation,” Curry recalls. Another favorite was with David Cone, another former pitcher, and current fellow commentator for the YES Network. They connected with a shared lifelong interest in sports journalism. He and Cone are currently working on a book.

Curry also had the opportunity to write a book with Derek Jeter, the famous former shortstop for the Yankees who retired in 2014. In 2000, they wrote The Life You Imagine: Life Lessons for Achieving Your Dreams, a book giving advice for achieving goals. With only a six month time limit to write, Curry talked to Jeter and his family as much as he could to get to know as much about him as possible, strengthening their relationship in the process. His hard work paid off, as The Life You Imagine ended up selling 150,000 copies and garnered positive reviews.

The books aren’t his only accomplishments, however. Curry has won four Emmys for his broadcasting. He is very laid back about these achievements, though of course he appreciates them. “I know when I've done a good job, I don’t need to have a piece of hardware to tell me that,” Curry says.

Another large part of his career is Jack Curry TV, or JCTV, a series original to YESNetwork.com where he interviews popular players and media personalities.

However, the job leaves Curry working “vampire hours,” as he calls it. While living currently in River Vale, his studio for YES is in Stamford, Connecticut, about an hour drive. To add to the long commute, his occupation as TV broadcaster is not your ordinary nine-to-five job. He normally leaves his house around 2:00 in the afternoon, and often doesn’t make it home until 2:00 in the morning. These obscure hours don’t come without consequences, though. Curry recognizes the struggles that come with the job for his family and friends, and admits that he doesn’t always get enough time with them. But they recognize the importance of his career, and how dear it is to him, and Curry continues to live his dream.

Curry gave a lot of advice to the NHS journalism students. He encouraged students to work for what they want and stay persistent, saying, “Be involved and don't be denied.” He is a great example of following and achieving dreams, and pushed students to do what they enjoy. “If you find a job you love to do, you'll never work a day in your life,” he says, admitting it’s a cliche. Curry lives this reality.