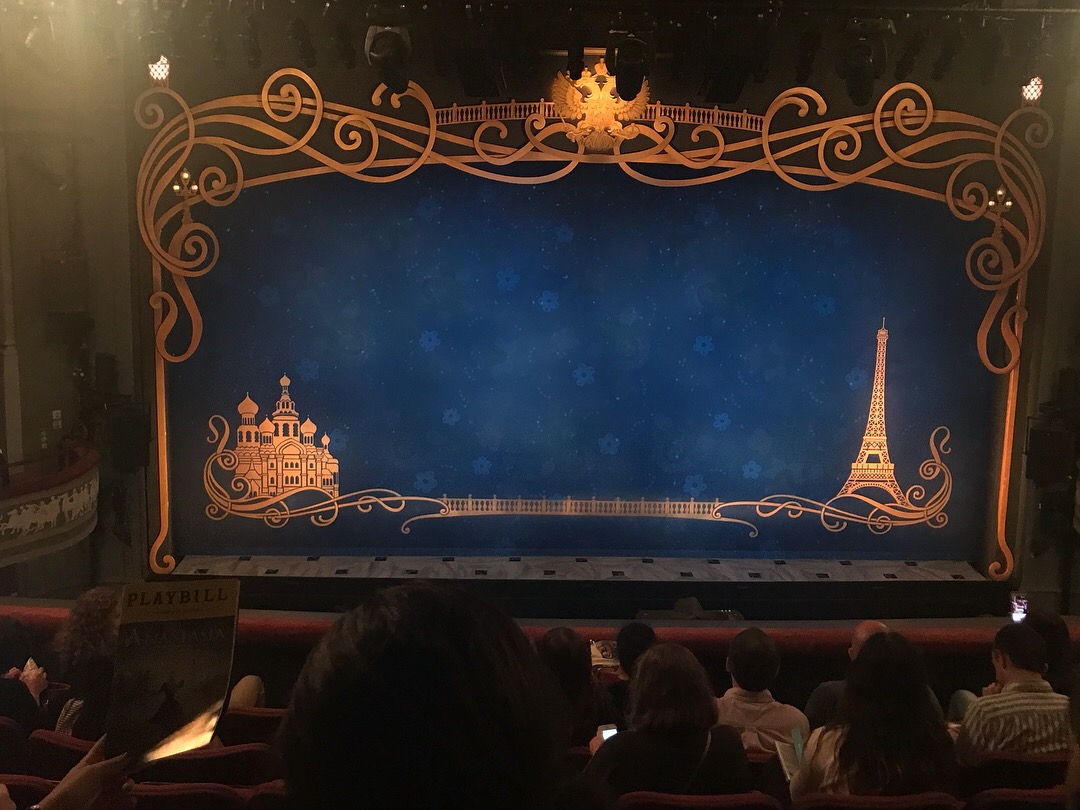 The Mystical World of Anastasia

Submitted by Gabrielle Mackiewicz on 19 June 2018

A Review of Anastasia on Broadway

New York City was bleak on May 15, 2018, as I ventured to the city with the Nutley High School Key Club to see a performance of Anastasia on Broadway. Rain fell in a deluge, and as we stepped off our yellow school bus to get a slice of pizza that New York is famous for, we were all drenched in a matter of minutes. Twenty minutes before our 7:00 p.m. showtime, we  braved the rain to walk the few blocks between the restaurant and the Broadhurst Theater. We were met with a warm, quaint theater, where we went up a flight of stairs to the bottom mezzanine. I sat in the middle of the row, looking down onto a royal blue curtain.

The curtain rose to a background of orchestral accompaniment, captivating the audience in the story of the downfall of the Romanov Empire in the Russian Revolution in 1918. Of the royal family, the Dowager Empress, Marie, was the only to survive after moving to Paris years before, and her granddaughter, Grand Duchess Anastasia, was rumored to have escaped execution by the Bolsheviks.

In the years following, the Dowager Empress offered a reward for the safe return of Anastasia, but was met with many imposters. As the Russian lower classes continued to become increasingly poorer with the new government, Dmitry and Vlad, two commoners, tried to find a fake Anastasia to present to the Dowager Empress to make some quick cash. With this they come across Anya, a young woman with amnesia, with the physical qualities to pass as the lost Romanov. As Dmitry, Vlad, and Anya journey to Paris to the Dowager Empress, Anya begins to regain parts of her memory, and the three begin to question if she really is Anastasia.

Filled with catchy songs and its fair share of comedic and heartwarming scenes, Anastasia is a must-see. Loosely based on the animated film Anastasia, it shares some of the same songs, but adds 16 new tunes. The stage production definitely surpasses the movie in maturity, leaving the mystical elements of the film for a more historically accurate view of early 20th century Russia. However, the musical still has that magic in other ways.

Christy Altomare, who played Anya, had stunning vocals. She captivated the audience with songs like “Once Upon a December,” all numbers full of emotion to draw viewers in. John Bolton as Vlad captured the comedic elements of the character, making him lovable and funny. Countess Lily, a friend of the Dowager Empress and love interest for Vlad, was full of character, and Vicki Lewis, the actress who played her, stole the show with her sass.

What were perhaps most striking were the costumes. Casual clothes fit the time period, embodying the glum browns and grays of commoners. To describe the intricately detailed dresses and suits as “formal wear” would be an understatement. Women’s gowns were made with vibrant fabrics fit perfectly to each actress, and were adorned with sparkling stones that shone under the spotlights. Men wore three-piece suits with tailcoats, full of class and sophistication. The costume designers nailed the look and feel of the Russian upper class and wealthy Parisian socialites.

Anastasia was a heartwarming musical that left the audience on the edge of their seats. From laughing to being on the verge of tears, the production was full of emotion. The cast had wonderful chemistry, and the set and props created a feel that transported you back to 1927. Though different from its movie counterpart, the musical still had plenty of magic.