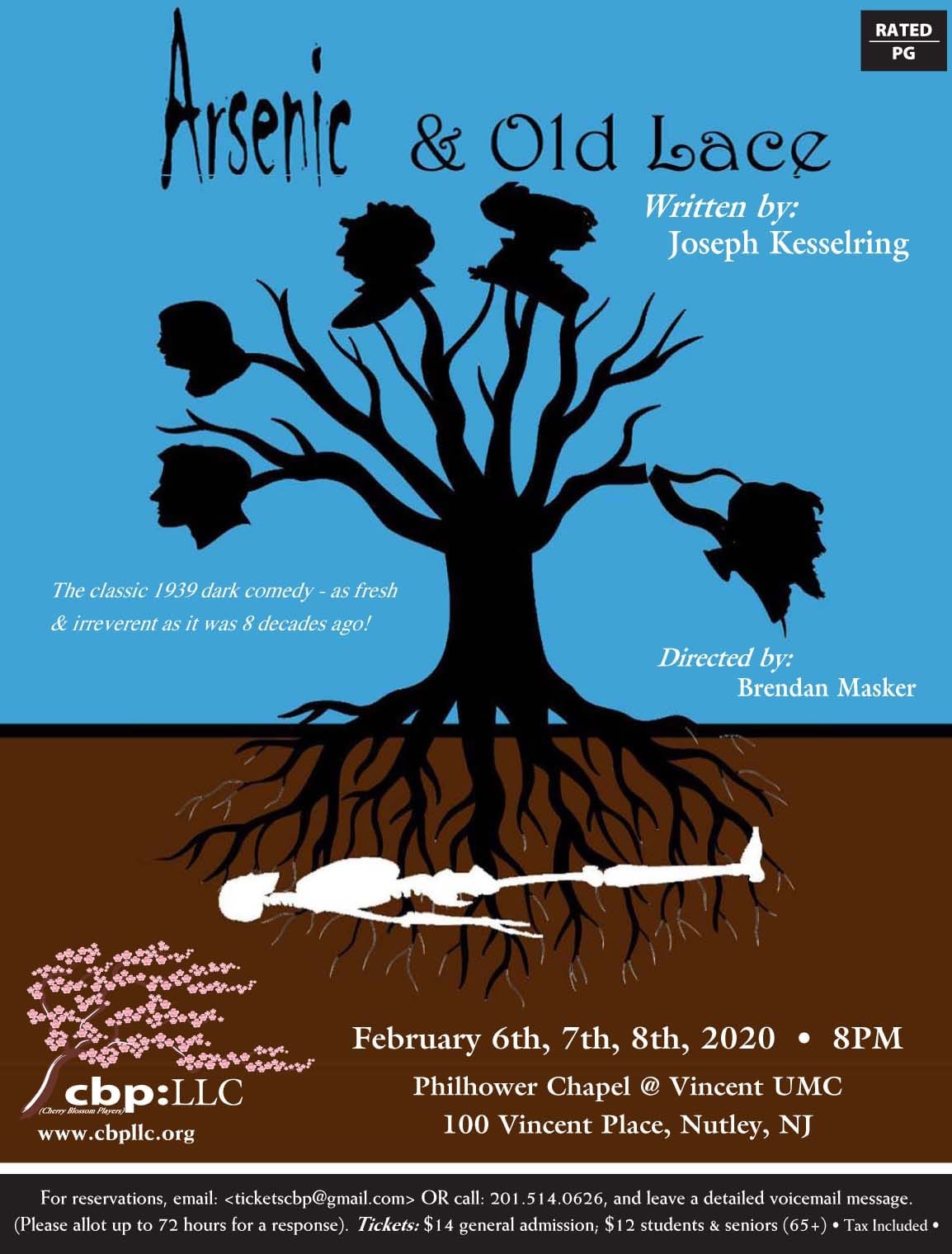 The Cherry Blossom Players (CBP), formerly known as "Belleville's own community theatre group," was created when the basement of Christ Episcopal Church in Belleville flooded. Thousands of dollars worth of equipment was destroyed. According to their Facebook page, a musical revue was to be performed as a fundraiser for the church, raising $1,200 after one night alone. The group was given the name of CBP in 2006 after the trees in Branchbrook Park, since Belleville is the cherry blossom capital of the country. The group was founded in 2005 by Ricky Franco and “specializes in eclectic interpretations of old works and provocative new pieces,” states their Facebook page.

The group's production on February 6, 7, and 8 is titled Arsenic and Old Lace. The play was written by Joseph Kesselring in 1939. “The play centers around a young dramatic critic named Mortimer Brewster who has to deal with his crazy family including a brother who thinks he’s Teddy Roosevelt, a brother who is a failed surgeon and serial killer, and his aunts who, though charming and hospitable, seem to be harboring their own dark secret,” states director Brendan Masker. “I was in charge of casting and directing the lines and movements of the actors. I also designed the poster and, due to conflicts, I am playing two minor roles. This is my directorial debut but I have music directed two shows previously with Cherry Blossom. (Godspell, American Idiot).”

The cast is a group of 11 actors, with Masker included, and a sound and lights operator. The producers are Ricky and Emily Franco. The Franco family and Patty Hogan, who run the door, tickets, and refreshments for intermission are also involved.

Rehearsals began in early November, about twice a week. Once tech week came along, the cast was spending more time practicing to prepare for the day of the show. There are a lot of components that go into organizing and preparing for a performance to make it run as smoothly as possible. There are rehearsals each week, which take up a lot of time and commitment. Actors also have to memorize lines to make sure they are ready for the day of the show. They have to gather props, try on costumes, and even research appropriate music for audience entrance. One of the actors, Dennis Rakuckas who plays Jonathan Brewster, even built the false wall and window seat that will be used for the show.

The main roles include Abby, played by Mary Beth Maffey, and Martha, played by Lisa D’Agati Greerhart. Brewster, the sweet aunts, Mortimer Brewster, played by Aedan Masker, who is a theatre critic and lead male. Jonathan Brewster, played by Dennis Rakauckas, and Mortimers estranged brother and Dr. Einstein, plated by Barby Helena, who is his surgeon companion.

“My goal was honestly to have a chance to be a part of this show. I was cast in a production in high school and had to drop it, but it’s always been one of my favorite shows. It’s twisted and dark but light and funny,” says Masker.

The CBP always hopes for and prepares for a big crowd. Masker says that community theatre is, “one of those things that are very fluid in terms of audience”.  Because it is a popular show, Masker and the rest of the CBP hope it will catch people’s attention the way it did for him over a decade ago.