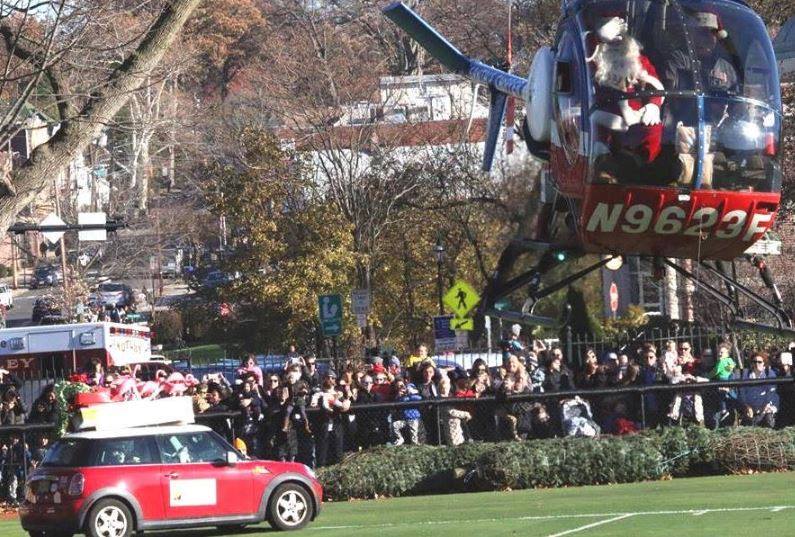 Submitted by Abigail Scheidel on 3 December 2018

On Friday, November 23, 2018, Nutley residents poured into the Oval for Santa’s annual arrival. The Nutley Chamber of Commerce has hosted this popular event for the past 57 years and they hope to carry the tradition of making children and families happy during the holiday season. As usual, Santa and Mrs. Claus arrived in a helicopter exciting all the anxious children and they continued to make them smile while walking around meeting them. There was free hot chocolate, prizes, and lots of entertainment for the Nutley families. The Chamber promised the first 500 children free goody bags.

Parents, who experienced Santa’s arrival in Nutley as a kid, are now taking their children to the same thing years later. At past events, people called it a magical, unique day because there is something so special about it that carries on for generations. Originally all that was in store for the event was Santa, but eventually it evolved into a fun spirited event for Nutley. Santa has been able to distribute his joy to the children of Nutley since 1961, and the Chamber of Commerce is not planning on stopping anytime soon. Nothing goes without flaw though. Barbara Chiarieri, an office manager in the Chamber, explains, “One year, our Santa was ill and I needed to find a replacement last minute.”

Chiarieri has been on the committee for the past five years. Now, she is the head of the event and helps organize the entire thing. Chiarieri and the rest of the helpers begin their preparations in August. Chiarieri says, “Each month has different tasks that must be accomplished up until the day of the event.” Each different department in Nutley is needed to sign off and approve the event. The Public Safety, Fire Department and Department of Public works are especially required for Santa’s arrival in particular. Flyers are also circulated around town early on so people can save the date.

Santa’s arrival is a very stressful event and there is a lot of work that must be completed before Santa and the children arrive. Chiarieri explains, “There are many things that need to happen in a very short period of time.” The 500 goody bags and 2,300 candy canes must get transferred from the Chamber office to the Oval. After that all the candy canes have to get put into boxes for Santa to distribute. All of the volunteers also need to come together and discuss their roles for the day of. Everything does not get magically done, and Chiarieri continued to mention all of the responsibilities that there are. Hot chocolate must be made, signs need to be made then hung, and performers need instructions.

This year, it was exceptionally cold, at just about 30 degrees the day of the event. Natalia Acevedo, an NHS student went to the event with her mom, sisters, and nieces. When asked about Santa’s arrival the first thing she noted was that, “it was really cold.” Although the weather was not very cooperative the event was still a success. Natalia described it as “well planned.” She observed the excitement of all the children during Santa’s famous arrival from the helicopter and first hand experienced the joy that Santa brought to her nieces.

There were seven characters along with some elves that walked around this year, greeting children who were waiting for Santa and Mrs. Claus. Ellis Dance Studio and the Nutley Raiders Varsity B Team gave exciting performances that kept everyone engaged. The Nutley School of Music came once again singing Christmas carols for the audience and Ultimate Entertainment provided the music. As Chiarieri expresses, “Every year brings a hiccup or two.” This year some items were delivered to the wrong location on the wrong day, a last minute character change was needed, and the new necessary paperwork was needed in order for Santa to fly via helicopter.

Prior to the event, Chiarieri said, “I do prepare and hope for the best! I’m always hopeful that the weather cooperates and we get a big crowd that is excited to see Santa.” Her wishes were granted by Santa’s arrival and all the other activities during the event running smoothly. Santa brought the Nutley families plenty of spirit to spread for this holiday season.