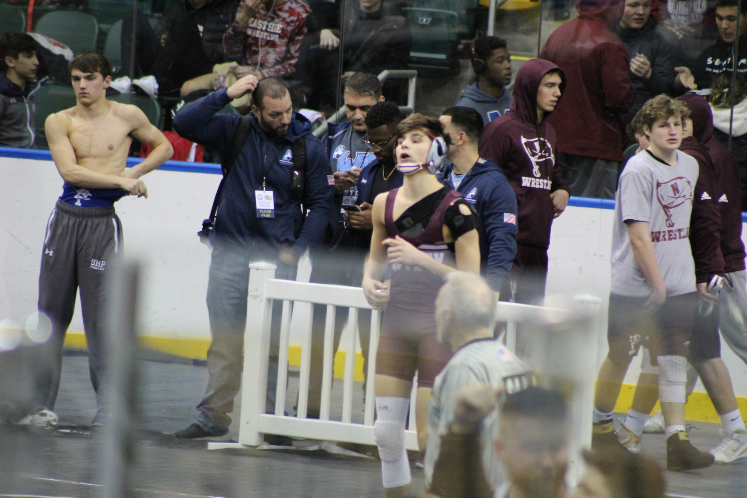 The 2019 - 2020 season began Monday, December 2, after Thanksgiving. The team’s first match is December 19 against Passaic Valley at Nutley High School. Until then, the team will continue to work hard to get the best results in their first match. Jacob Gonzalez, senior captain of the wrestling team, has been a key player for the team the past three years and he is ready to bring his all for his final season.

Jacob began wrestling when he was 5 years-old and in kindergarten. Until he was old enough to join the Nutley recreational team, he practiced with his dad and friends in his basement. He also joined a club team to prepare. As his wrestling journey continued, he continued to work hard, even in the off seasons. When he isn’t practicing with his club team, he likes to bring a couple of his friends to the Nutley Parks and Recreation to practice there. Jacob said, “it’s a fun way for us to practice and get better.”

Now with the winter wrestling season in full swing, Jacob has set some personal goals for himself, as well as some for the team. He hopes to make it to the State Tournament because he had a tough loss there his junior year. That is his main goal of the season, but he also would like to get 35 wins. Jacob expressed that, “35 wins would put me at my 100th career win.” With this accomplishment, Jacob would become the 16th wrestler at Nutley High School to achieve this goal His name will hang on a banner in the NHS gym for future generations of wrestlers to see and be inspired by.

The team’s main goal this year is to make it far in the sectional conference and hope to win it all. This is something that the Nutley Wrestling team has not done in a very long time so Jacob explains that, “having our team up on a poster would mean a lot.” They will face teams from Bloomfield, Seton Hall Prep, Long Branch, Cedar Grove, North Bergen, Caldwell, Kearny, and West Essex.

Jacob has done wrestling for over a decade, so this sport has really shaped him into the person he is today. He says, “Wrestling has made me disciplined. I know how to control my weight, not overeat, and proper workout ethics.” In order to remain in the same weight class, it requires hard work to maintain the same weight. Jacob continues, “I’ve also learned to cope with stress and manage my time.” These useful skills will help Jacob as he makes the transition from high school to college where he will continue his wrestling career at Johnson and Wales University.