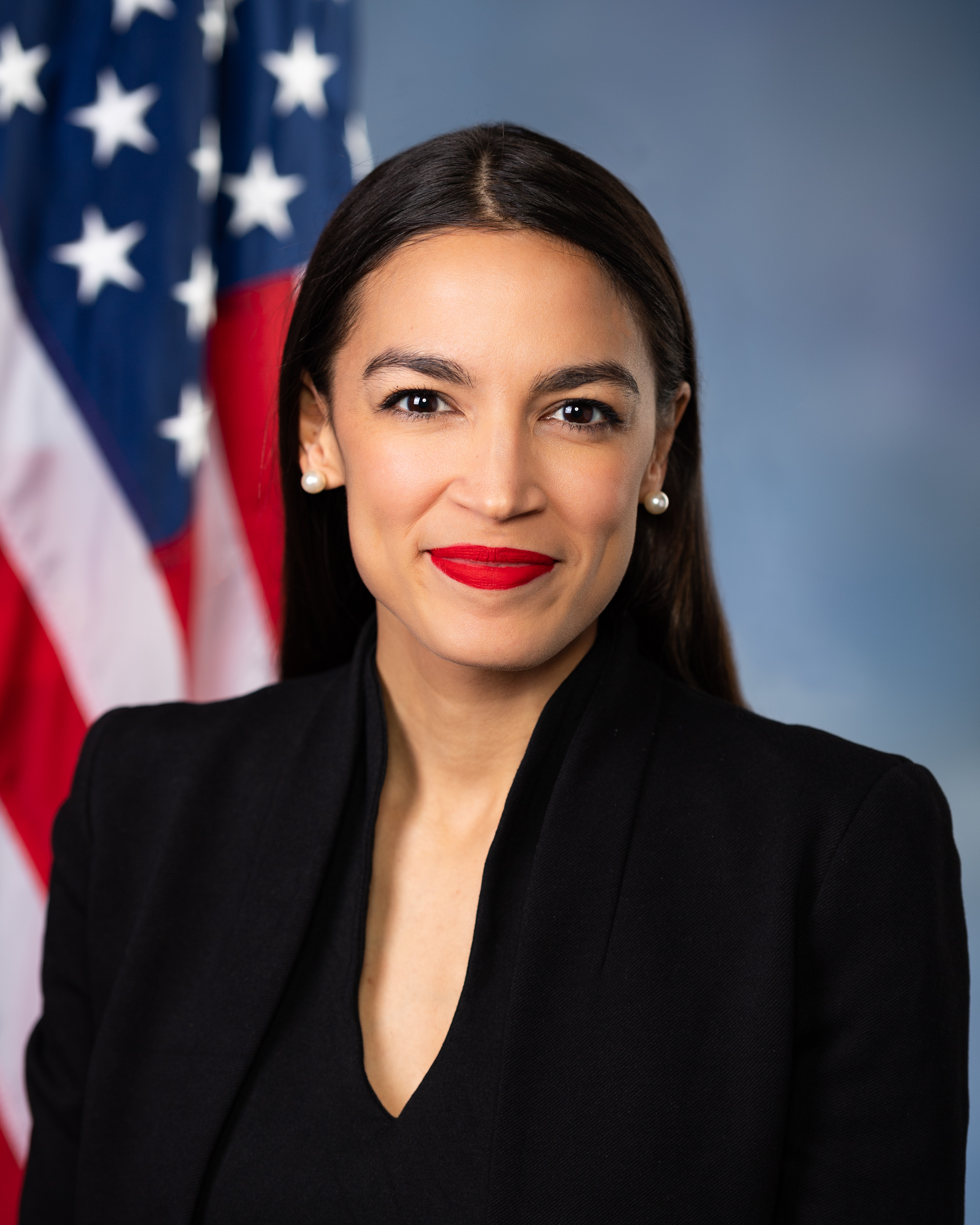 American politics and media have been shaken by the progressive and socialist views of 29-year-old Alexandria Ocasio-Cortez, the youngest female Congressperson in United States history. With strong viewpoints and a strong demeanor, she has garnered a lot of press - both good and bad - as she continuously captures the media’s attention with an uncanny ability to direct the public eye to issues she is talking about. The representative for New York’s 14th District has molded the conversation on politics since before she was elected, as she advocates for things like Medicare for all and action against climate change.

Ocasio-Cortez was born in the Bronx, New York City to a Puerto Rican family. Her father owned a small business, and her mother, an immigrant, worked cleaning houses. Ocasio-Cortez attended Yorktown public schools as a child, and graduated from Yorktown High School in 2007. After graduating, she studied at Boston University, where she got degrees in Economics and International Relations. In college, she interned for former Senator Ted Kennedy in Massachusetts, working with immigration and foreign affairs.

After the loss of her father, while she was in college, her family struggled to pay bills, as they lost their main source of income in the middle of the recession in 2008. Ocasio-Cortez took on jobs as a bartender and waitress back in the Bronx after college in order to help her family keep their house.

“That experience put Alexandria on the other side of laws and policy,” she explains on her campaign website, “as she went from reviewing economic outcomes to having first-hand experiences with families struggling to maintain decent housing, healthcare, and immigration status.” She then dedicated her life to improving her city, as she worked to help education and community planning.

During the 2016 primary election for the Democratic nominee for president, Ocasio-Cortez worked as a volunteer helping the campaign of Vermont Senator Bernie Sanders, who is known for similar progressive views. She then turned her attention to trying to tackle Congress herself.

Ocasio-Cortez’s Democratic primary was the first in NY-14 since 2004, where she beat out incumbent Joe Crowley after he served 10 terms. Crowley had always run uncontested. The win was an upset for some, but a significant stride towards change for Ocasio-Cortez and her supporters. She then won the midterm election on November 6, 2018 with  ease, winning with 78 percent of the vote.

She ran her whole campaign for both elections without funding from lobbyists, which she is strongly against. Her funding came mostly from donations by supporters.

Ocasio-Cortez’s views have made waves throughout the country, gaining her support and hate from all sides of politics. Though she is formally a Democrat, she is also a part of the Democratic Socialists of America. As described on her campaign site, “Alexandria Ocasio-Cortez [ran] for Congress to create an America that works for all of us, not just a wealthy few.” With the socialist and progressive opinions comes her push for government expansion into healthcare, secondary education, the fight against climate change, and gun reform.

“To me, democratic socialism is the value that, in a modern, moral, and wealthy society, no person in America should be too poor to live,” Ocasio-Cortez said in an interview with PBS. “What we have witnessed is the unprecedented concentration of wealth at the very top, tippity-top of the 1%, and we’ve seen the consolidation of corporations start to really erode our wages.”

One of the biggest political standpoints for Ocasio-Cortez has been the basis of Medicare for all, which would provide universal, government-funded healthcare service for all Americans. The United States currently has a system like this in place, but only for people age 65 or older. Ocasio-Cortez argues that it is not only senior citizens that are in need of healthcare and may struggle to afford it, but rather that there are people of all ages who cannot pay for the sky-high prices of medical care in America.

“Almost every other developed nation in the world has universal healthcare,” she says. “It’s time the United States catch up to the rest of the world in ensuring all people have real healthcare coverage that doesn’t break the bank.”

She also advocates for free tuition for public colleges, universities, and trade schools, in views that further the idea of spreading-the-wealth consistent with her ideologies. This would allow students to get a higher education and earn a degree, which is pivotal for most occupations, without having to pay off debt for years afterward. In addition, she supports a policy of student loan debt cancellation by the government and private firms. Not only would these actions raise human capital, she argues, they would spur the economy, as people have more money without the weight of student loans.

As gun violence becomes an increasingly dire concern in the United States, Ocasio-Cortez supports a federal ban on all assault weapons and high capacity magazines. She thinks that those convicted of domestic abuse and stalking should not have the right to buy firearms, and that there should be universal background checks on all purchases. Ocasio-Cortez criticizes her peers in Congress for accepting money from gun lobbyists, and insists that representatives should not be paid off by special interest groups or corporations that support and/or sell guns.

In the criminal justice system, Ocasio-Cortez finds several problems that she hopes to rectify while in Congress. She is against private prisons, which profit off of the incarceration of Americans, and wants to get rid of cash bail, so that people are not in jail for long periods of time before they are tried in court. She wants automatic investigations into killings by police by a neutral party, an issue that has become of increasing concern in recent years as police shootings of people of color in what many deem unjustified situations have caused outrage.

Ocasio-Cortez wants to stop mass incarceration and the war on drugs, and as a result end the “school-to-prison” pipeline. With this, she also advocates for the legalization of marijuana, and for people incarcerated for nonviolent drug charges to be released.

As immigration becomes an increasingly debated topic, Ocasio-Cortez holds views that are considered radical by many. She wants to abolish the Immigration and Customs Enforcement agency (ICE), especially after they received massive backlash for the mistreatment of immigrants detained at the border by separating children from their parents. “As overseen by the Trump administration,” she says, “ICE operates with virtually no accountability, ripping apart families and holding our friends and neighbors indefinitely in inhumane detention centers scattered across the United States.”

One of Ocasio-Cortez’s views that has garnered a lot of attention recently is her plan to combat climate change. She wants to implement a Green New Deal, which would make, “structural changes to our political and financial systems in order to alter the trajectory of our environment.”

“Right now, the economy is controlled by big corporations whose profits are dependent on the continuation of climate change,” she argues. “This arrangement benefits few, but comes at the detriment of our planet and all its inhabitants.”

This plan includes a 70 percent income tax in the highest tax bracket, as well as cut backs on federal spending for fossil fuels and the military. This would allow the United States to transition to a 100 percent renewable energy system by 2035, which would severely cut back on harmful greenhouse gas emissions that cause global warming.

“Rather than continue a dependency on this system that posits climate change as inherent to economic life,” Ocasio-Cortez says, “the Green New Deal believes that radically addressing climate change is a potential path towards a more equitable economy with increased employment and widespread financial security for all.”

With these considerably radical ideas contrasted to some of the current political status quo, Ocasio-Cortez has garnered a lot of attention, both good and bad. While many, particularly left-leaning young people, praise her for opinions and agree with her position of instilling positive change for the middle and lower classes, many take issue with her propositions. Many conservatives have expressed distaste for Ocasio-Cortez, often for more than just her political agenda. She has received criticism for anything from her outfits, to her demeanor, to a resurfaced video of her dancing in college.

However, it isn’t just her political opponents who have criticized her. Some Democrats have taken issue with her assertive nature and progressive ideals as well. Joe Lieberman, a former Democratic Senator, warned that Ocasio-Cortez is “likely to hurt Congress, America, and the Democratic Party.”

Ocasio-Cortez countered this claim in an interview with Vogue, saying, “I think we’re scared of things we’re not familiar with, that show power.”

No matter your position, it is undeniable that Ocasio-Cortez has shaken the political sphere by starting a conversation about the possible presence of democratic socialism in this country. She continues to captivate the media, and despite adversity, she won’t be backing down anytime soon.