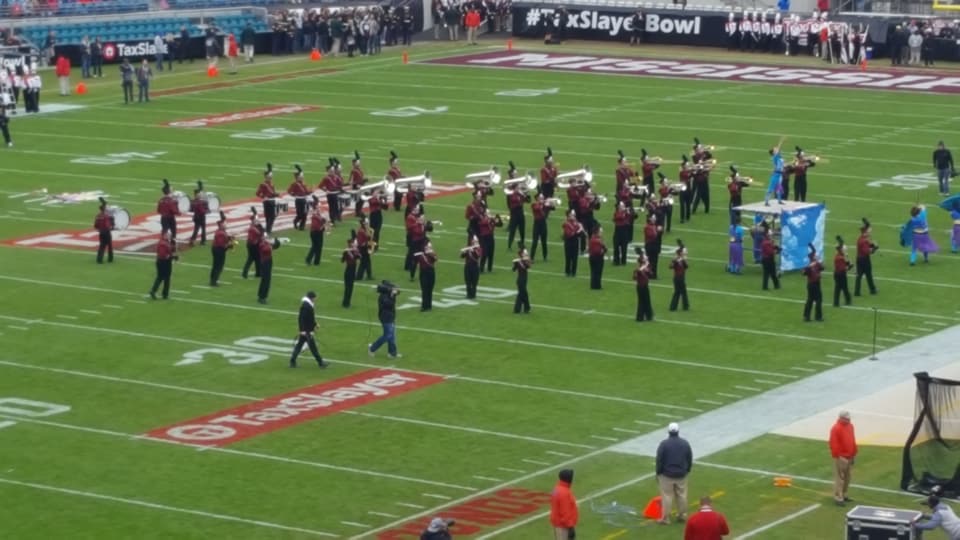 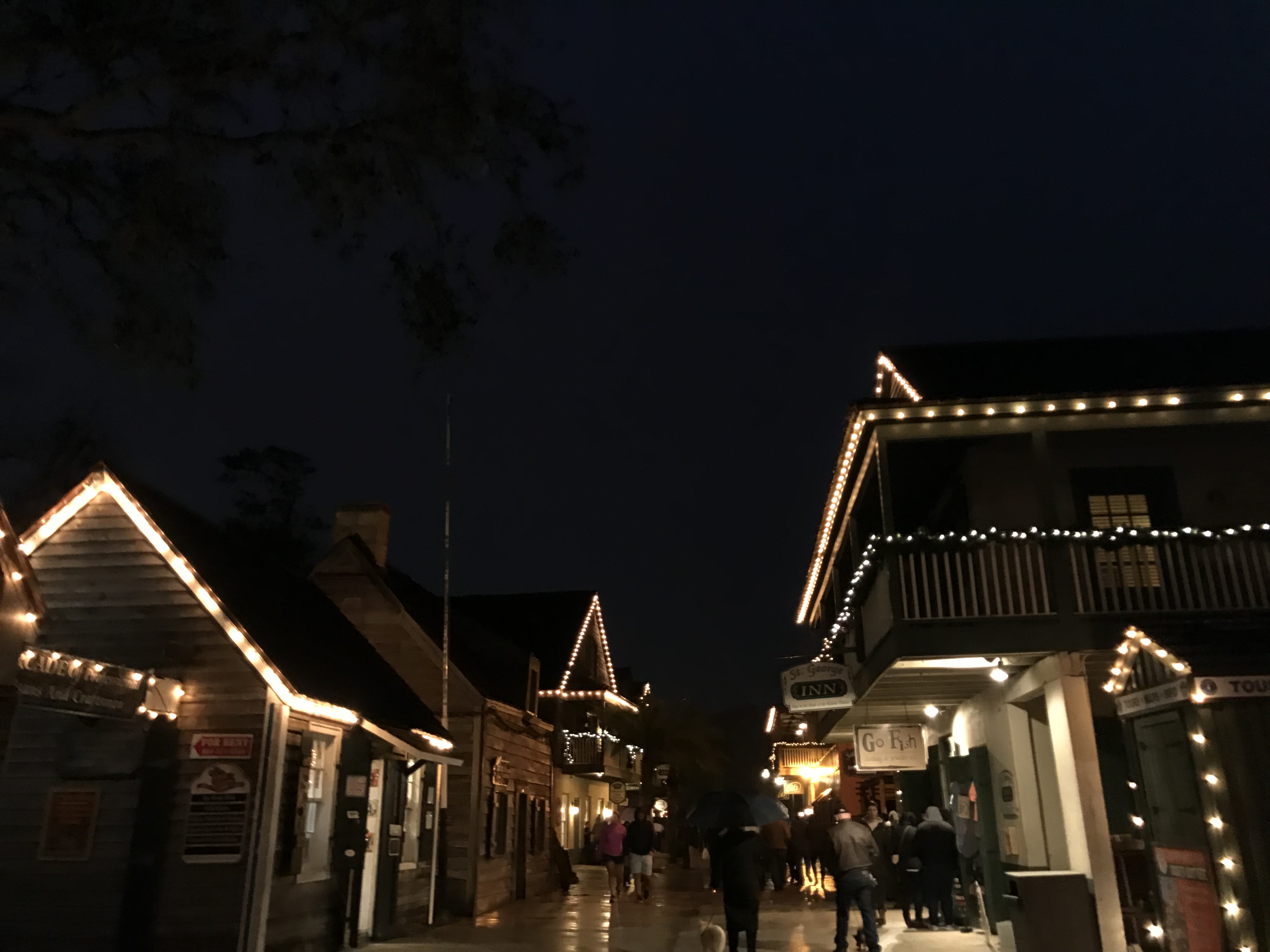 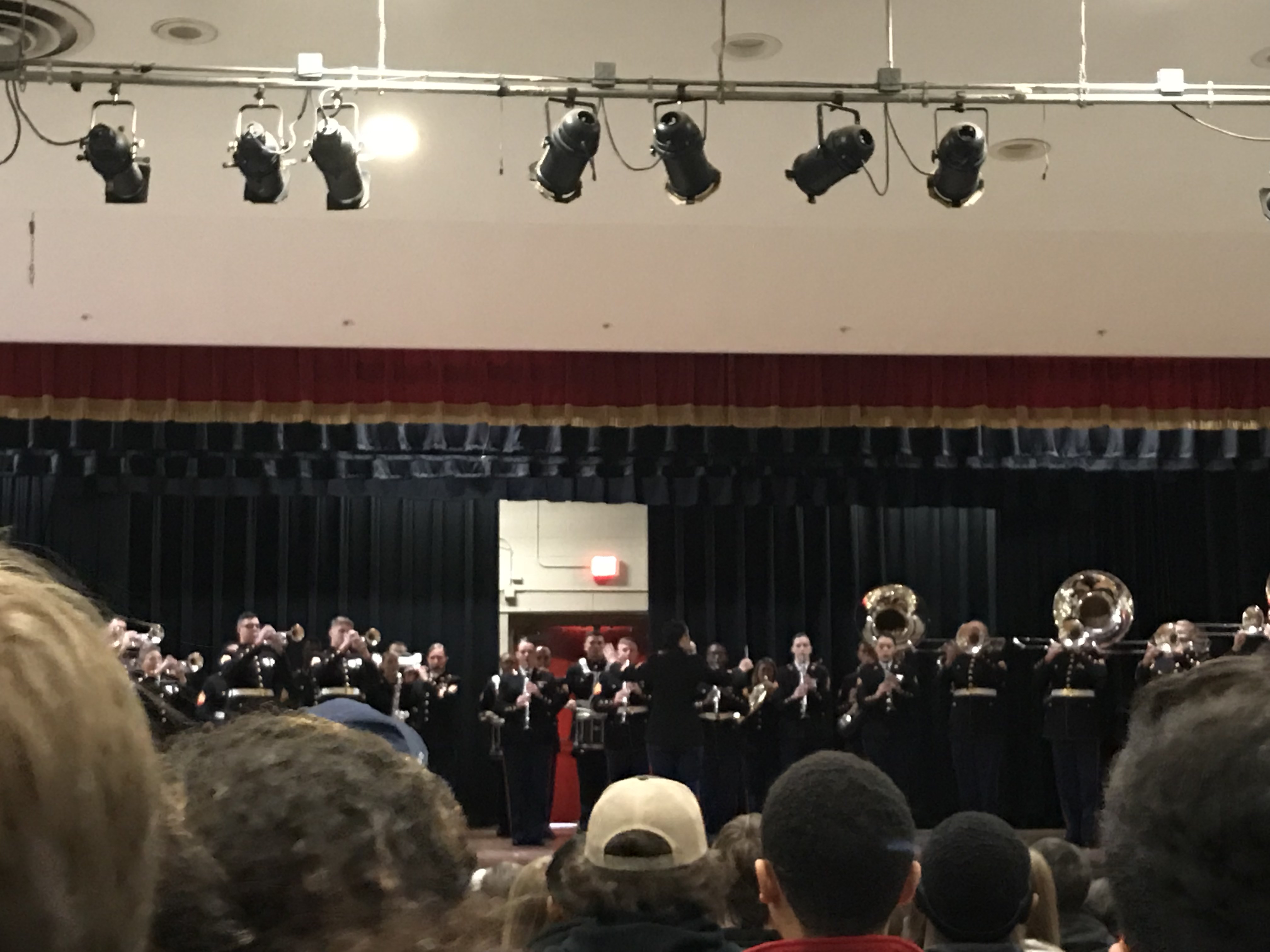 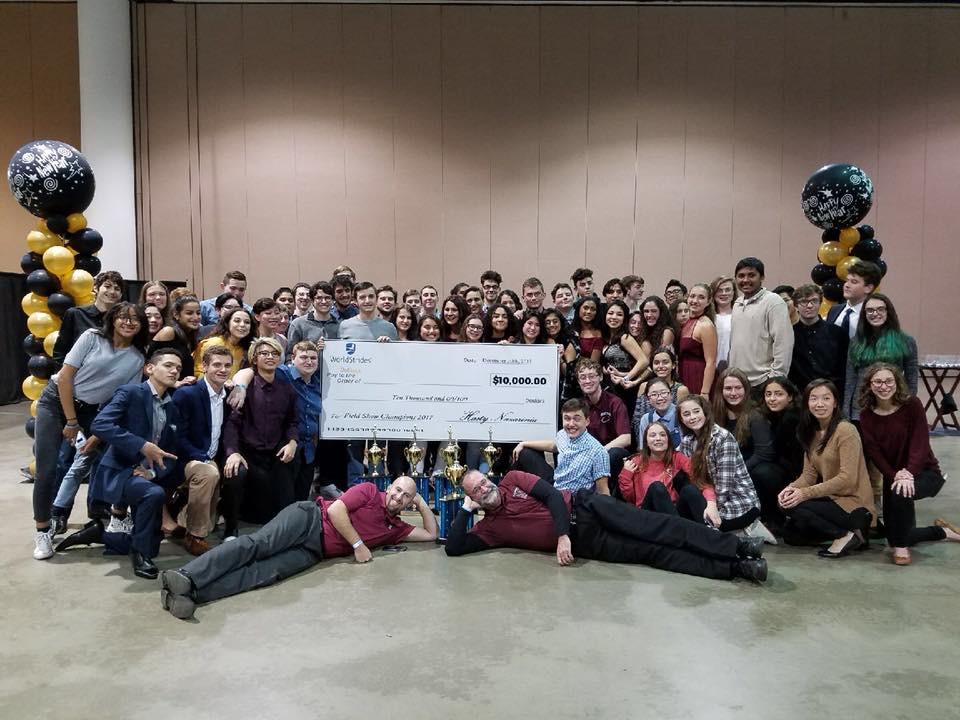 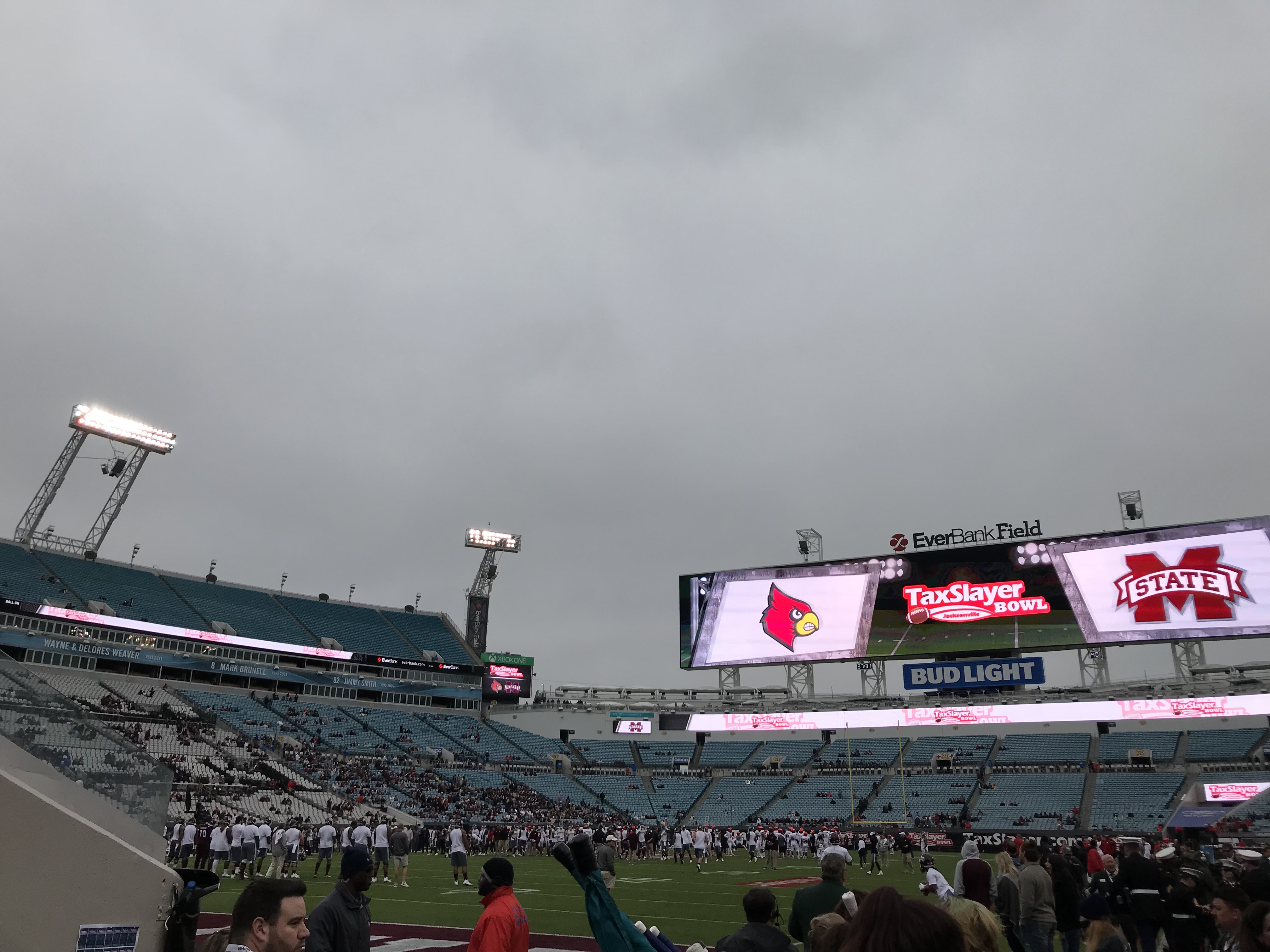 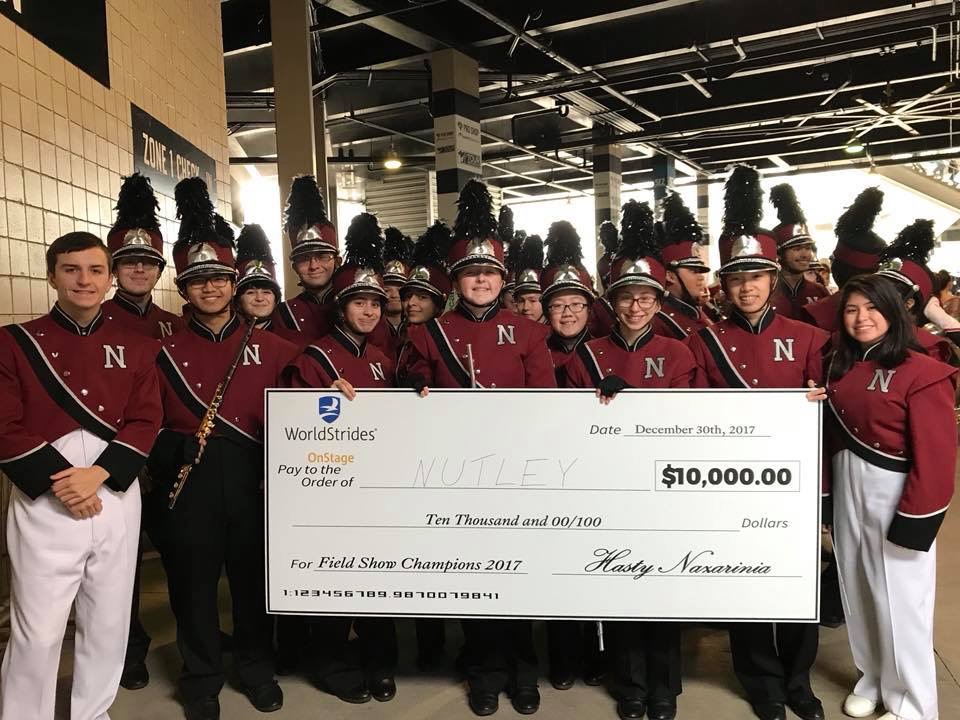 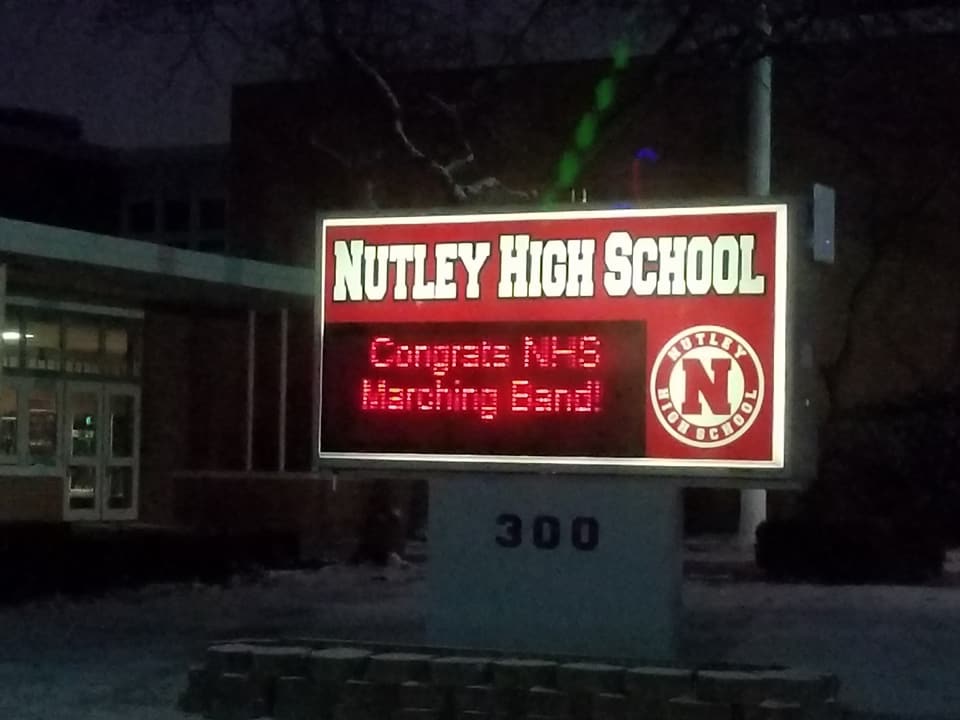 Submitted by Gabrielle Mackiewicz on 26 January 2018

For most students, holiday break is a time of celebration, family time, and relaxation. But this break, the Nutley High School marching band traveled to Jacksonville, Florida to perform in the Taxslayer “Gator” Bowl. The performance included a tune played with 11 other bands from across the country during halftime, and a possible pregame show if we won a competition. The annual college football game saw Mississippi State University and the University of Louisville. As a part of the band, I traveled with about 75 of my peers for a one-in-a-lifetime experience.

On Wednesday, December 27th, 2017, we started our long bus ride down, leaving around 5:30 a.m. We made three stops, in total, and ate some wonderful fast food. I spent most of the ride either sleeping, or watching the first season of Stranger Things on Netflix (a productive day, as you can tell).

We arrived at the Crowne Plaza in Jacksonville around midnight, capping off a whopping 17 and a half hour journey. It was a long day, but not tiring. It was something of a calm before the storm, because the next few days were about to get serious.

Thursday, the 28th, was a big day for the band. In the morning, we drove to the Bolles School, a private school in Jacksonville, for the Contest of Champions. In this competition, we were one of three schools competing not just for the satisfaction and bragging rights that come with winning first place, but also a spot playing pregame at the Gator Bowl, and a $10,000 prize.

It was cloudy day, with a continuous light rain, and very windy. With about an hour and a half before performing dedicated to practicing, I spent a decent portion of my time worrying about the rain ruining my flute. The odds were not looking to be in our favor; rain leaves the turf slippery, water can cause damage to instruments, and the wind can really throw of the sound quality.

However, after eating a quick meal in the school’s gymnasium, a lovely Subway sandwich provided by the event organizers, the rain subsided slightly, leaving a slight mist- not ideal, but tolerable. We performed our show, weather and all. I walked off of the field feeling satisfied with my performance for the most part, but still slightly uneasy. We had a few slip-ups, but would that cost us the win? We would not find out until the next night.

After performing, we freshened up on the bus while on our way to my favorite place we visited: St. Augustine, Florida.

St. Augustine is in northern Florida on the eastern coast, and is the oldest continuously occupied city in the United States, as it was founded by the Spanish in 1565.

The historical aspects of the city are what drew me in the most, and some friends and I spent a large portion of time in the Colonial Quarter. This area is home to many shops, restaurants, museums, and other attractions.

Some of my favorites stores sold jewelry and knick knacks. Most were nothing too fancy, but had reasonably priced accessories, from which I picked up a few rings. A common item was small glass figurines of animals (which were adorable), and also chunks of real crystals like amethyst and rose quartz.

Other highlights included a candy shop that sold everything you could ever think of, ranging from older candies, like Sky Bars and Charleston Chews, to the classics, like Hershey’s and Reese’s (in which I was literally a kid in candy store), as well as a store that sold every type of hat you ever imagine, from bowler hats, to sun hats, to caps.

To top it off, every person I came across was cheery and exceptionally nice. Store owners and clerks had great customer service, and were very sweet. It was an extremely merry and sunny atmosphere, even if the weather said otherwise. It was still raining.

Afterwards, we capped off the day at Buca di Beppo Italian Restaurant for a (pretty mediocre, if I am being honest) meal.

On December 29th, a Friday, we were able to meet other band members from other schools from all across the country for the first time on the trip. The band went to Terry Parker High School in Jacksonville for a mass band rehearsal, where we practiced for the halftime show.

The event coordinators, part of WorldStrides Travel Agency, organized for the Parris Island Marine Band to perform for us. That was such a unique experience, and I, along with everyone else, was amazed with their skill.

Following a few hours of rehearsal, we headed back to the heart of the city for a pep rally at Jacksonville Landing. Here, we played a few tunes in front of an audience of mostly Mississippi State fans, who were quite a crowd. We left the square to a cheer of “Maroon and white! Maroon and white!” It was an immediate bond (at least in their eyes) once fans saw that we had the same school colors as them. It was a nice coincidence!

Next was my favorite part of the trip. We headed to the Prime F. Osborn III Convention Center for a gala, after a quick clothing change and freshen-up on the bus. This is where we would finally find out the results of the competition.

After eating dinner, which included mashed potatoes, rice, chicken, and ham, the awards ceremony began. A woman first came up to the stage at the front of the room to commend cheerleaders who were also participating in the halftime show. Then, another woman came forward to give the results for the marching bands.

All of the band directors were recognized, and Mr. John Maiello, our director, received a lot of applause from our group.

Then there was the moment of truth, where we would find out the winner. In a tense few moments, our hearts were lifted. Our hard work had paid off. We won the competition, and earned the pregame show and cash prize, not to mention caption awards for best marching and maneuvering, percussion, color guard, and music- every title that was given.

We received a giant, oversized check, which we did not hesitate to take pictures with. Music played throughout the hall, and after one of our seniors accidentally started a dance circle, the fun continued for the rest of the night.

It was a day filled with new experiences, meeting new people, and a feeling of pure joy.

Saturday was the big day. Kickoff for the Gator Bowl was at 12:00 pm, but we were once again at Terry Parker High School bright and early for another rehearsal with all of the bands. Then we headed to EverBank Field (with a police escort, which was cool) for the game. We practiced outside one of the tunnels, gathering the attention of some onlookers, before taking the field for our pregame performance.

As always with this season’s show, our grand entrance included charging to our opening spots while cheering (which definitely confused a few people that were left on the field after the players’ warm up). It was a surreal experience.Cameramen followed us around as we marched, projecting our image onto the jumbotron.

We were given seats in the audience to watch the game in, which, of course, were all the way up in the nosebleeds. But we were not in our seats for long until we had to go back down again for our halftime performance.

The high school bands, along with the Marine band that accompanied us, went on last, allowing us to see snippets of Mississippi’s and Louisville’s bands. We marched out onto the open field, the Marine band in the center, color guard in the back, and cheerleaders in front. In a mashup of songs entitled “Shout Out for America,” our colossal group played snippets from “Sweet Caroline” by Neil Diamond, “American Pie” by Don McLean, and “Battle Hymn of the Republic” by Julia Ward Howe.

We were free to wander for a bit after our performance, which meant for most of band that it was time to get some overpriced stadium food, which is exactly what my friends and I did.

On our trip for lunch, we were stopped by a woman while we were still in uniform, who asked if we would would take a photo with here two little kids. Neither were likely any older than four. We gladly agreed, if admittedly a bit confused at first, as she snapped picture. Now it is probably on Facebook somewhere. Hope she got a lot of likes!

After spending an embarrassing amount of time trying to find our way back to our seats, my friends and I sat again to watch the rest of the game, leaving at the end. Congrats to Mississippi State for the win!

Dinner that night was at Bono’s Pit Barb-B-Que, who served some great mac-n-cheese. By the time we arrived back at the hotel, everyone was pretty much exhausted (even though many discussed plans for a party). My roommates and I relaxed in our hotel room, ready for the ride back home the next day.

After another early call time, we headed out of Jacksonville around 6:00 a.m. and headed back to New Jersey. The ride home was basically the same as the ride there; I slept, we stopped for food, and I watched more Stranger Things.

As we arrived in Nutley, we were met with a few police officer a few blocks away from the high school. We pulled up to Franklin Avenue at around 11:30 pm with another police escort, this time on our home turf. We were greeted by parents waiting on the sidewalk, cheering and holding posters, despite it literally being 10 degrees out. “Congratulations NHS Band!” one read. What would we do without our band parents?

As we drove home, I felt perfectly content. While still at school, my friend’s mom handed me a plastic bag, a small gift. With the bustle of trying to unpack bags and move things back into the school, I did not get a chance to look at it then. In the car, I opened the bag to find a frame holding a picture of my friends and I, all holding the large check at the gala. It was the best way to end a glorious week.