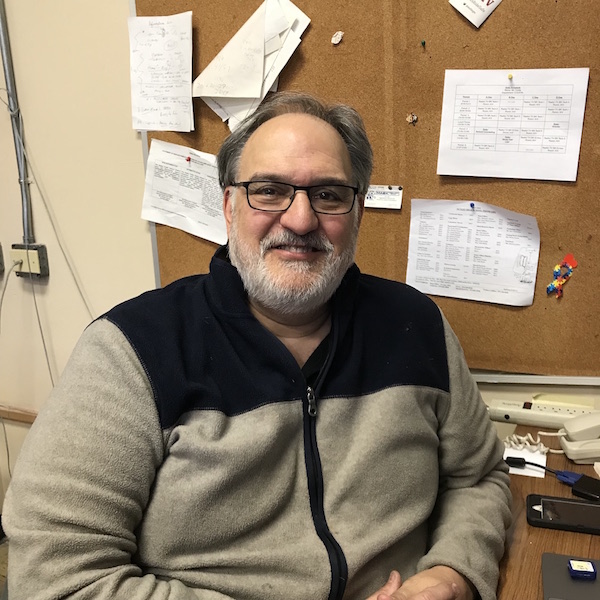 A New Addition to NHS

This past summer Mr. James Kelly, former Nutley High School Radio/TV Broadcasting teacher, suddenly retired to take on a new journey in his life as head football coach at Caldwell University. Once Mr. Kelly retired, NHS Principal, Mr. Denis Williams, and a search committee went on the hunt for a new teacher for this role. There were very specific requirements that needed to be met for someone to be hired for this position since they needed specific broadcasting skills and familiarity with production equipment. It took a little longer than expected to find a teacher, but in early November, Mr. Andrew Conte started his job as the new TV teacher at NHS.

Before coming to Nutley, Mr. Conte worked at Saint Mary’s High School in Rutherford for many years. He also worked at Passaic High School for three years after that. He attended Montclair State University for his graduate degree and Seton Hall for undergraduate degree. He always had an interest in broadcasting and, in college, when he found out it was a career he said, “This is something I see myself doing for a long time.”

For 15 years, Mr. Conte had his own local business in Nutley called AC Video Services. He was also a professional MC/entertainer for 20 years. In the 1980s, he worked for a weather service doing weather reports. He worked for WMTR in Morristown as an on-air personality and also for Total Traffic Network as a producer and camera operator. However, being a teacher was not Mr. Conte’s first career choice. After coaching football for a year at Xavier High School in New York City, he decided to pursue teaching full-time.

One student in the TV II class, Samantha Gabriele,  said she was very surprised when she heard about Mr. Kelly’s retirement.  He always talked to his classes about how excited was for the future of the program and how much it had to offer. “Obviously everyone is going to miss Mr. Kelly because he was a great teacher and person, but we are excited to see what Mr. Conte has to offer to the course and what new things we are going to be learning," Samantha said. Some of Samantha’s goals for this year are to learn as much about the industry and the equipment as possible while also creating well-made, professional quality productions.

The TV classes have already started developing and organizing ideas for their news show, “Raider Nation,” and their sports show, “Raider Playbook.”  These videos will be posted on the NHS TV YouTube channel along with other videos done by the TV students. In past years, students have done campaigns like “Raiders Ride Safe,” game shows, music videos, filmed school plays, and filmed Nutley Board of Education meetings.

Mr. Conte has many goals for his first year at NHS. He is looking to get the studio up and running using new state-of-the-art equipment, help students produce shows on the professional level, and prepare them to pursue a career in live TV or film-making. He is also looking to finish his teaching career here at NHS and to learn, along with his students, the new technologies in the ever-expanding world of broadcast TV/digital media. All of us students at NHS in the TV program are very excited to see what Mr. Conte has to offer.