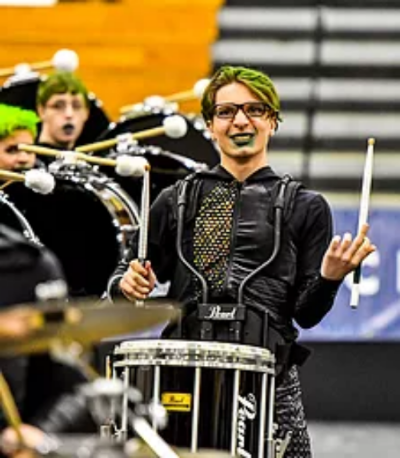 NHS Indoor Percussion is Here to Make a Statement

Submitted by Gabrielle Mackiewicz on 1 November 2018

The Nutley High School Indoor Percussion ensemble is preparing to start their third season this November. Despite the group’s short life span, they are no stranger to success. After taking the first place title in the Regional A division at the US Bands Championships in April with their show “Toxicity,” they have a big reputation to live up to for this upcoming competition season in winter 2019.

As put by the Nutley Music Boosters Association’s website, “Indoor percussion marries elements of music performance, marching, and theater.” It is performed indoors, as the name suggests, and is composed of two different parts: the drumline or battery that marches on the floor and consists of snare drums, bass drums, tenor drums, and cymbals, and the front ensemble or pit, which usually has mallet instruments, synthesizer, drum kit, and auxiliary percussion.

The director, Julia Wehrer, more simply describes indoor percussion as, “Drums in a gym.” Julia began as the percussion instructor of the NHS Marching Band in 2016, and then coordinated the establishment of the school’s indoor program for that winter season with Dr. James Reilly, the Coordinator of Fine, Practical, and Performing Arts. “I did indoor when I was in high school, and I loved it,” Julia says. “[NHS] didn’t have a program, and when I was brought on as a staff member, I knew Dr. Reilly was really interested in starting one. He knew that I wanted to start one, so we collaborated and made it happen.”

This new opportunity for percussionists is a way for them to strengthen their skills, and provides a unique performance experience separate from the marching band or class ensembles during the school day. “We wanted to give the drummers a chance to do something after the fall season,” Julia explains. “They can continue drumming so we can get our program during fall and during indoor to a different level.”

Sophomore Meredith Carson, who plays the cymbals, enjoys the more one-on-one experience that comes with indoor percussion. “I like the fact that it’s a lot smaller than marching band, so we get more personal attention,” she explains.

This season will be full of big changes. After winning Championships with their previous show, the group has a big reputation to live up to. In order to challenge the students and make a name for the NHS Indoor Percussion Ensemble, they are moving up to A Class instead of the Regional A division. As a new group, they first competed with other beginner ensembles, but will now be going against higher level ensembles. Julia says, “We may not place as high, but just to be in that category is a whole other step. We’re going to try to do our best with the better competitors.”

Along with the higher category, the ensemble will be competing in the Winter Guard International (WGI) circuit this year, in addition to the US Bands circuit that they competed in previously, to further challenge and raise the caliber of the group. While US Bands is more local, WGI is worldwide, and the indoor percussion ensemble will be competing at two of their regional competitions this year in Trumbull, Connecticut, and Toms River, New Jersey. Competing in the circuit is a way for the group to make a name for themselves and be exposed to a higher level of competition.

To  be performing at this level in only their third year of existence is almost unheard of, and the group has grown immensely in skill since they began. “Between the first year and the second year, the growth was exponential, it was ridiculous how good they got by the second year,” comments Julia. “I think it’s because the kids bought into it, and they were all really passionate about it. They kept practicing and wanted to get better together.”

The group dynamic is is one of the most important parts of the program. Thais Jimenez, a senior who plays the snare drum, says, “I enjoy how competitive it is, and the fact that I can be with my friends.” Thais describes, “It’s not about the destination, it’s about the journey,” as the good times with friends are a big takeaway for members. “We’re very tight knit,” Meredith says.

Despite the common relaxed atmosphere with such a close group, most members are very serious about percussion-- so-called “percussion cultists” as described by junior Christian Gonzalez, who does auxiliary percussion. This focus drives the group to perform to the best of their ability.

Last season’s win further drives the ensemble to succeed. “It makes the kids feel good, and it’s always fun to win, especially a championship,” Julia remarks. “I’ve never seen a group grow that much before. I think coming into this year, they are all determined to keep getting better.”

The group is motivated to put out another great show this year, and though it will be a lot of hard work, Julia is planning for another impressive performance. “Last year was such a great show, and the kids loved performing it,” she explains, “I’m trying to pick another show that’s similar in mood and do another aggressive show, because they seem to get into that kind of stuff. It’s a little bit more mature with the concept, so they’re going to have to really get their performance up to another level.”

With a reputation to live up to, the NHS Indoor Percussion ensemble is on its way to another prosperous season. Filled with motivation and dedication, nothing can stop them from triumph. They hold all of the tools to succeed for the 2019 season, and they are ready to put out another fantastic show.