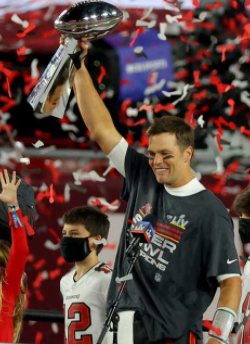 The Battle of Super Bowl 55

Submitted by Erik Thompson on 23 February 2021

The Chiefs and the Buccaneers were battling in Super Bowl 55 on February 7, 2021. The Kansas City Chiefs and the Tampa Bay Buccaneers were both the best teams in the regular season. When they played each other on November 29, 2020 it was a close game but the Chiefs came on top. Fans watching were expecting an amazing game from both the greatest quarterbacks in the league right now. Patrick Mahomes and the Chiefs are one of the greatest offensive teams in history. But Tom Brady, the quarterback for the Tampa Bay Buccaneers, has six Super Bowl rings and is going for his seventh ring.

The Super Bowl took place in Tampa and was the home stadium of the Buccaneers. The Super Bowl was streamed on CBS and only 96.4 million people watched it. This was the lowest viewing super bowl since 2007.

In the first quarter both teams started off to a slow start, but the Chiefs put up three points with a field goal in their first drive. The Buccaneers tried to come back with a touchdown and that is exactly what they did. Rob Gronkowski, the tight end for the Tampa Bay Buccaneers, caught his first pass for a touchdown.

Tom Brady and Rob Gronkowski played for the New England Patriots and won several Super Bowl rings together. This time, they were in the Super Bowl again, but playing for different team. At the end of the first quarter, it was 7-3 for the Buccaneers, both teams off to a bad start. That changed when the Buccaneer’s first drive in the 2nd quarter led to another touchdown to Rob Gronkowski. The Chiefs had to get a touchdown on the board but they fell short and forced another field goal. After this, the Buccaneers were on fire and Tom Brady threw another touchdown to Antonio Brown this time. By half time the score was 21-6 for the Buccaneers.

At halftime, there was a halftime show and the singer was The Weeknd. After this halftime show, the Chiefs started well with a 30-yard return and good field position. But the Chiefs offensive line was all out so it was the backups playing and Patrick Mahomes took a lot of hits and had to make tough throws. Because of this, the Chiefs were forced to punt to the Buccaneers. Once again, Rob Gronkowski got a big play and really good field position. After  the running back Leonard Fournette ran the ball for 30 yards and a Buccaneers touchdown. The Chiefs couldn’t find any way to score, Buccaneer’s defense was just playing really well. The Chiefs had some small plays and led to another field goal. But the Buccaneers were torturing the Chiefs defense and the Buccaneers scored a field goal at the end of the 3rd quarter and the score was 31-9. Going into the fourth quarter, no one had hope for the Chiefs anymore and once again the Buccaneers locked the Chiefs offense up and the Buccaneers just wasted time. The game ended at a score of 31-9 the Buccaneers became the Super Bowl 55 champions.

Patrick Mahomes made a lot of good plays and had to get out of the pocket a lot to make a play. But the Buccaneers were the champions of this battle.

Tom Brady now has seven rings and he isn’t done yet he still wants to play in the league at age 43. Patrick Mahomes and Tom Brady exchanged words after the game and Tom said, “ You are going to be the best after me.” This made Patrick Mahomes happy because as a child Tom Brady was in his first Super Bowl when Patrick Mahomes was 5. It was a good game in all but the Chiefs just couldn’t find an opening to score on the victorious Buccaneers.