Behind Her Eyes: A Netflix Review 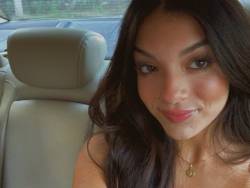 Submitted by Adrianna Vitorino on 12 April 2021

The new Netflix series, based on Pinborough's novel of the same name, has mainstream media watchers intrigued. The show takes on a psychological approach with a hint of fantasy. The show constantly has watchers wondering what was really going on, much like the show, Black Mirror, where the viewers knew there was going to be an underlying plot twist. The screenwriter, Ashley Pharaoh says, “Writing plot twists is really about surprising audiences in a way that makes them think back to the [beginning of the] book or film and get the satisfaction of realising the twist was already there waiting to discovered.” Most people are left on the edge of their seats because of the absurd ending that takes every viewer by surprise.

The show entails a seemingly normal love triangle between the single mother, Louise Barnsley, her boss, David Ferguson, and his wife, Adele. SPOILER ALERT! However, there is a psychological twist that leaves the audience wondering up until the last minutes of the season.

The new series leaves many questions unanswered during the first episode, like What’s wrong with Adele? or How does Adele know things that are physically impossible?

For starters, Louise runs into David, at a local bar after her friend bails on her, who turns out to be the therapist where she works the next day. Even though Louise finds out he is her boss and is married, she starts falling for him. Despite her affair with David, she becomes very close to Adele. As things are revealed, Louise begins to see that Adele has been lying and psychotic while David has been trying to get a divorce.

During the middle of the series, the audience is introduced to Adele’s old friend, Rob, through flashbacks, whom she met during her days at the psychiatric hospital.This is where the fantasy aspect of the show is introduced, as they both project their souls into each other’s body and pretend to be each other.

By the last episode, the viewer is questioning how each storyline intertwined until the final moments where we find out that Rob’s soul has been in Adele’s body the entire time. To fully understand the extent of the show’s mind games, it is easier to watch it for yourself.

The show seemed to outdo itself and kept viewers interested. Many people went on to rave about the plot twist and the new take on the average Netflix show. The series ending up being a total hit for all ages, with an ending that has definitely left its own individual mark in the minds of viewers.