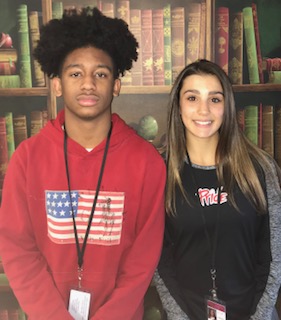 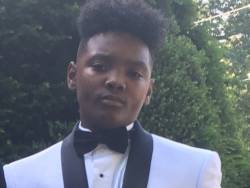 As the 2017-2018 school year approaches a close, freshmen have almost made it through their first year at Nutley High School. Freshmen were given opportunities to join sports teams, get involved in clubs and activities, to become more educated and further prepare for the next three years they will spend at NHS. Freshmen, like Jordan Greene and Lorianne O’ Connor, got the chance to play sports for the school, and experience what it is like to be a high school athlete.

Jordan Greene, 15, earned the opportunity to play for the freshmen basketball team at NHS.   “It’s very different as a freshman playing sports, than being in the middle school,” says Greene. “It’s way more disciplined, with remembering plays, jerseys, more practice, and less games.” The freshmen basketball team finished with 12 wins and six losses, and Greene contributed to that, averaging 10 points, and five rebounds a game. “I’m upset there are no playoffs though,” says Greene. “We would have a great chance of bringing the title to Nutley (in the future).”

Though Jordan is very focused on basketball, school helps him get better at the sport. “Games and practices would always be after school,” says Greene. “So you can’t really pay attention to how tired you were after school, and it gave me motivation to get better.”

Another freshmen Lorianne O’Connor, 15, was given the chance to play for the freshmen basketball team, and is now part of the varsity softball team. Though people may have not seen her on the basketball court before, Lori is a longtime player. “I played recreational basketball before starting any type of travel or club team,” she says. “Once I thought I was better at playing the game, I played travel basketball for about three years.”

The freshmen girls basketball team finished their season with seven wins and 19 losses. “The season didn’t go as expected, but we gave it our all,” said Lori. Lori was one of the important players on the team, averaging 10 points per game.

Lori didn’t take a break for the spring, but instead she tried out for the softball team. After tryouts, Lori was told that she made the varsity softball team. Lori is not new to softball, playing the sport for a majority of her life. She plays on a club team, the New Jersey Pride Elite Team.  Lori got the chance to go to Orlando with the team.

Now that she’s played a couple games with the team, she has been able to see the differences between her club softball team and the high school team. “My club softball team is not that much different compared to high school. I feel like in club you get more action and the game is faster, while in high school it's more relaxing for me,” says Lori. She plans to be the best teammate she can with her new team.

Since Lori is very focused on softball, she has to also make sure all her school work is done. “It’s good to take study hall, even as a freshman,” says Lori. “Also it’s good to do work during lunch if you’re doing a sport for the school, just to make sure you have all your school work finished before practice.”

The class advisors of  2021 are new to working with freshmen students.  Mr. Kevin Tempsick, a science teacher at NHS, is one of the two advisors of the 2021 class. Though it may be his first year, Mr. Tempsick still has milestones he would like the freshmen to achieve. “Milestones include adapting to the block schedule and figuring out the general way of life as high school students. The confidence I see in the freshmen at this point in the year is so much greater than it was when school began,” said Tempsick.

Mr. Tempsick also plans to achieve fundraising goals with freshmen this year. “Fundraising goals this year don't include specific monetary goals, but more so situating our class officers with the processes involved in fundraising and what is expected of them throughout their four years as officers,” Tempsick said.

Mr. Tempsick is alongside the freshmen all the way until they graduate. “I have several of them (the freshmen) in Biology class and those are my favorite classes to teach," he said." "The only thing I would ask of them is to participate in more fundraisers, because remember, we can only help you with events in the future depending on how much you participate now.”

Another freshmen class advisor, Ms. Emily Benjamin, is also new to the role.  “We have sold decathlon shirts, class apparel, and we have held smaller fundraisers at a variety of school events (and) we are currently working on organizing a bake sale,” said Ms. Benjamin. She  also plans to, “Raise as much money as possible  so that we can organize bigger fundraising events for next year.” Ms. Benjamin will also stay with the freshmen until they graduate, and looks forward to it.

As the year concludes, Lori still is playing softball, while Jordan is just focusing on school work for the spring. Many other freshmen got to play sports as well, and even got the chance to do other things like join clubs and many other activities. Now, the freshmen found out just how it is to be a Nutley Raider.