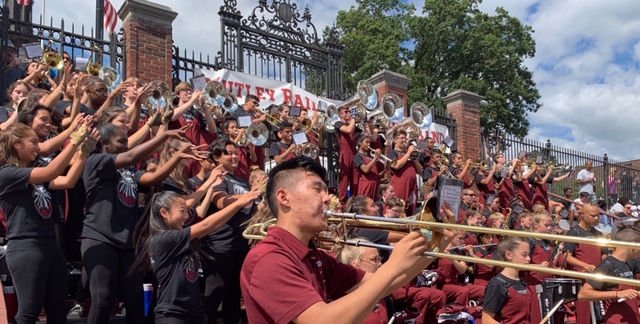 Submitted by Bhuvan Dave on 1 October 2019

More than 50 years ago, the Nutley Raider Marching Band was formed, with its only purpose being to support the Raider Football Team at their games. Today, the NHS Marching Band still sticks to its roots, by going to every varsity game and playing various “stand tunes” in the bleachers, such as Seven Nation Army or Timber. However, the band’s main focus has shifted to something else: competition.

Each year, a company called USBands runs 12 different competitive circuits for high school marching bands to compete in. Last year, over 700 different high schools along the East Coast competed against one another. Last December, the Nutley Raider Marching Band took home a third-place trophy at the National Championships in Allentown, PA. They also received an award for Best Percussion, giving their percussion section an undefeated season. This year, the Nutley Band has even bigger plans.

Early this summer, Mr. Vincent Vicchiariello, Director of Bands at Nutley High School, started the practices for the 2019 season. While the entire circuit only lasts for about six weeks, starting in late September, Mr. Vicchiariello believes that, “starting the kids off early is the best path to success.”

This year also marks the first year in the entire band’s history that 8th graders are also allowed to join the team. Also, the Music Department’s proposed trip to California in February has recently been approved by the Board of Education. Mr. Vicchiariello, in his second year as band director, hopes the band will continue to make great strides competitively, while also making unforgettable memories.